Inflation in the euro area picked up more than economists predicted though underlying cost pressures failed to accelerate, underscoring the European Central Bank’s struggle for price stability just days before officials debate the future of their stimulus program.

Consumer prices rose 1.5 percent in August after 1.3 percent in July, the European Union’s statistics office said on Thursday. That’s the highest reading in four months and exceeds the median forecast of 1.4 percent in a Bloomberg survey. 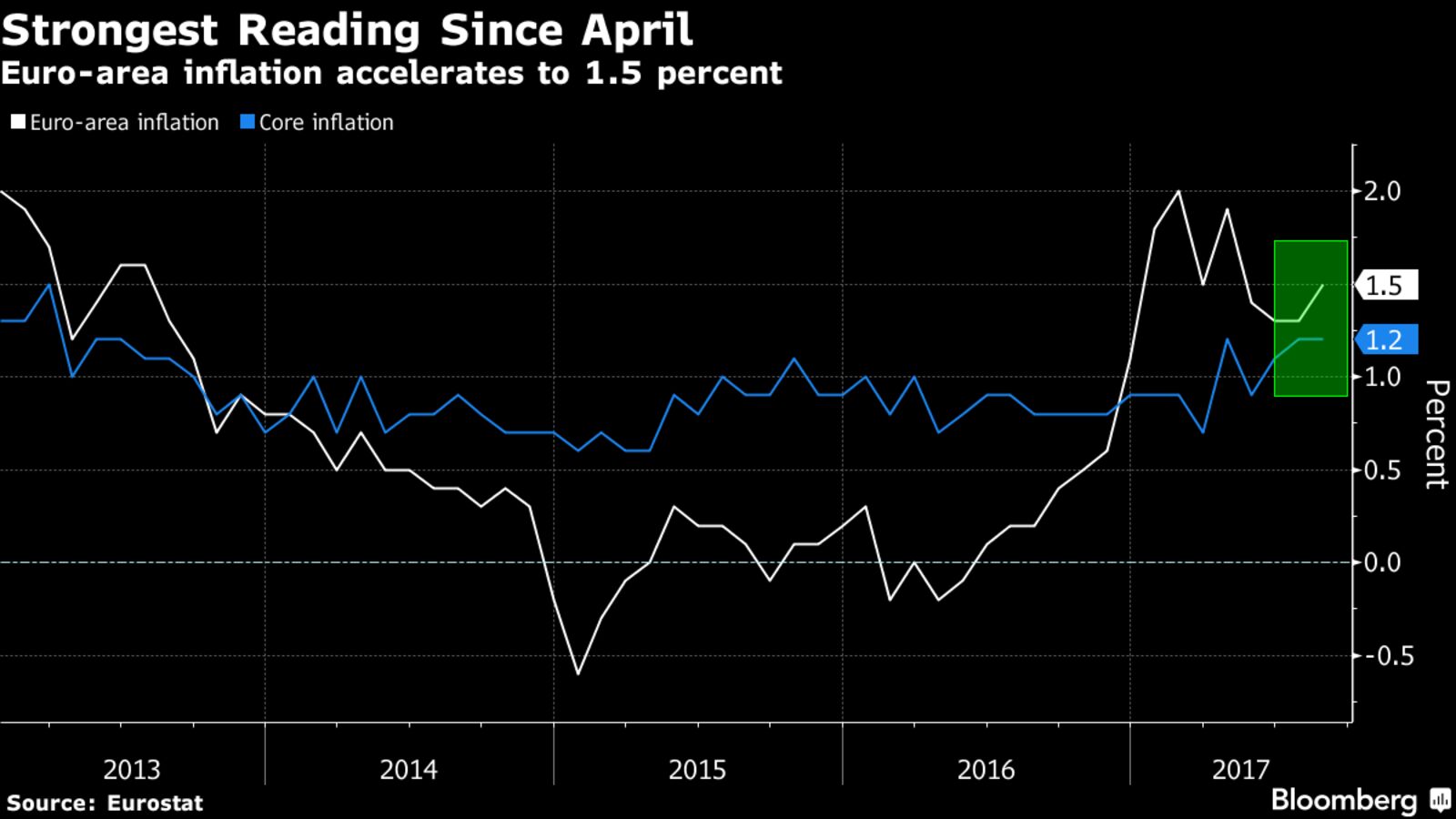 The acceleration, which is almost exclusively due to energy prices, follows stronger than expected inflation readings for Germany and Spain earlier this week. Euro-area core inflation, which strips out volatile elements such as food and fuel, held at a tepid 1.2 percent.

Growth in the 19-country region is on an upswing, with economic confidence touching a decade high and latest unemployment data, also published Thursday, showing a rate of 9.1 percent. Yet that hasn’t yet translated into significantly faster inflation and rising wages, despite the central bank’s negative deposit rate and its 2.3 trillion euro ($2.7 trillion) bond-buying program. ECB officials need to discuss the future of their quantitative-easing plan, which is currently set to expire by the end of this year.

The ECB is likely to take “a pretty cautious stance at its meeting next week,” Jennifer McKeown, chief European economist at Capital Economics in London, said before the data were published. “It won’t want to undo the groundwork it’s laid for the asset purchases to be tapered next year but I don’t think it will want to set out any firm plans as yet.”

At his speech in Jackson Hole, Wyoming, last week ECB President Mario Draghi appeared to temper expectations about any winding down of purchases, saying “a significant degree of monetary accommodation” is still warranted. The ECB’s Governing Council is scheduled to meet on Sept. 7 in Frankfurt.

One reason for concern may be the appreciating euro, which has climbed some 13 percent versus the dollar since the start of the year, causing a tightening of monetary conditions.

Minutes of the ECB’s most recent meeting showed showed some officials were concerned about the euro strengthening too much. That put investors on alert for signs Draghi will attempt to rein in the currency.

While his Jackson Hole comment is in line with statements at his July press conference, it highlights the divisions within the Governing Council ahead of the next policy announcement, which will also include updated economic forecasts. In contrast to Draghi’s dovish tone, Bundesbank President Jens Weidmann told the Boersen-Zeitung he saw “no acute need” to extend quantitative easing into next year.

“The way in which the euro has strengthened this year has exceeded expectation,” Stephen MacKlow-Smith, head of European equity strategy at JP Morgan, said in a television interview with Manus Cranny. “At the back end of last year, people were definitely positioned very long in the dollar.

EU Unyielding on Brexit Leaves May With One Choice: Pay the Bill.